Skip to content
Angela Duckworth is a smart lady and Grit was a fantastic read. She breaks up the book into three parts. What grit is and why it matters, growing grit from the inside out and growing grit from the outside in. She lays out her findings in a nicely drawn out way with anecdotes from her own life but mainly from scientific studies.
Early on she gets the reader to take the same Grit test she used in her studies. By doing the test, it gets to the foundation of what Grit is. When I did the test, I found I was more harsh than I should have been, so I got my wife to do it on my behalf. When I did the test, I was middle to above average grit. When my wife did it for me, I had a high Grit score.
I always felt I was gritty but never understood exactly what that meant. In hockey, a gritty player is someone who is tough to play against and wears down the opponent with their intensity. I never thought of myself in the hockey definition way but in Duckworths way, I would. I’ve never been the most talented but I’ve always had an internal drive that allows me to out work others and a constant drive to succeed. I’m pretty sure that’s Grit.
Grit is also something you can develop and grow. This is a major part of the book and goes against the idea that people are born with “talent”. There is a whole chapter dedicated to parenting for grit and I love her rule for her kids. If they start an activity in high school, such as ballet, piano, dance etc. They must stay in it for two years or more. I absolutely love this rule and whenever I have kids, it’s going to be in my house as well. She goes on to explain that from past research, this single data point is a greater predictor of college success than SATS!
So many cool examples and great relatable stories. I heard about this book a lot and understand why. Love it! 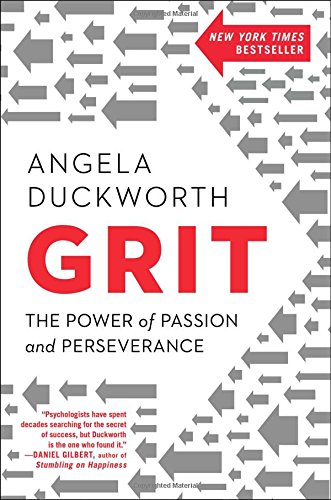