I take my dog for a walk every single day. Most days I take him on many walks. We have a pretty standard route and in the winter time, it’s a quick trip around my neighbourhood. Sometimes we go different directions but the walk is pretty damn standard. The day I got hit by a car, I took a route I’ve never taken before.

I’m not sure why I decided to go that way, but it’s eerie, that’s for sure. I was walking my unusual route, listening to a podcast. It’s November, so it’s dark early as the time had recently changed. Berkley is ahead of me like he always is, sniffing and loving the fresh air. I’m about half way through my walk and heading back home. I’m at a corner, so I turn left to cross the street. The next thing that happened, is one of the scariest moments of my life.

I was struck by a car and I didn’t even see it coming. I didn’t have time to brace myself or even think about what was happening. The only way I can explain how it felt was like most describe an out of body experience. I was struck on my right knee and thrown into the air. When I was in the air, it’s like time slowed. I felt like I knew something bad happened but the only thing I can remember thinking is “Don’t fall on your head, don’t fall on your head…”. It’s crazy to think I had the wherewithal to understand I was airborne and falling but I did.

When I hit the ground, I confused and wondering what the hell had happened. The guy that hit me was yelling and freaking out asking if he should call an ambulance. I didn’t even acknowledge him and within a minute or two, it dawned on me I was walking my dog. “Where is my dog!? WHERE IS MY FUCKING DOG?!” I was freaking out at that point, I was limping bad, looking under the car for Berkley, all while this guy was trying to talk to me.

I limp out onto the main street and saw something dash across the street, I was so relieved but unsure how bad he was hurt. He’s an incredibly smart dog and knows commands so I yelled as loud as I could “WAIT! WAAIIIITTT!”. And he did. He waited and I limped across the road to him and started checking him up and down. No idea how but he seem uninjured. The car must have just missed him and hit me.

Buddy was still wondering what the hell was going on and if I was dying or not. I walked Berkley back up to the scene of the crime and collapsed on the ground. At that point I was able to process what had happened to me and how god damn lucky I didn’t smash my head open. Buddy was chit chatting, trying to make conversations and I literally said “no man, I’m not doing this chit chat stuff right now, I can’t, I’m sorry.” I was trying to call my wife to come get Berkley as the police were on there way and possibly an ambulance. I was the one who had to call the police for some reason and they took our stories. The police officer couldn’t have been less caring or compassionate if he tried. Definitely felt like I ruined his plans or something.

My wife eventually came in an obvious panic as I texted “phone gonna die, was hit by car, XX Street and XX street, ok but come now”. It wasn’t funny at the time but we laugh now cause the guy introduced himself to my wife by saying “Hi mame, I’m the guy who hit Derek.” We waited for a bit and the police called us over, I refused ambulance and was wearing dark clothes so the police said it was an accident. No charges or anything. He gave us the accident report and exchanged insurance info.

We finally got home and noticed blood on the floor. Berkley was hurt, but not bad. His back nail had been ripped off. He was likely inches from serious injury or worse. So glad it was me that took the hit and was able to walk away. 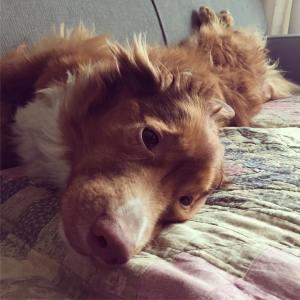 It took a while for it to sink in and I was injured for a while but this accident gave me a life jolt in a sense. It made me realize how short life could be and not to wait for things.
That’s the storey. Look both ways!