East Champ: I feel like the Rangers would have been among the top three teams if it was a full season. I really like their defence and guys like Callahan and Stepan are incredibly under rated. Having the best goalie in the league doesn’t hurt either.

Best Series: Pittsburgh and Boston will pretty much kill each other in a massive seven game thriller. Chara v.s. Crosby will not disappoint.

Wild Prediction:  Every game in the MTL/OTT series finishes in overtime. 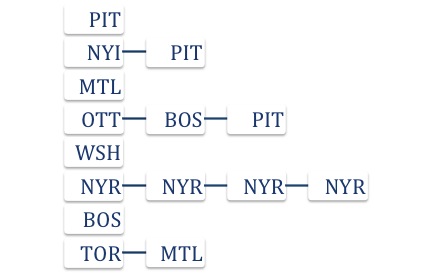 West Champ: I really like the Blues and even predicted them to go all the away in the preseason but LA is my team. The Kings have depth and depth wins rounds. Guys like Regehr and Richards will step up huge and lead this team.

Best Series: LA and St. Louis are two teams I would pick to win the first round if they weren’t playing each other. These two will go the full seven and I’m guessing overtime will end it.

Wild Prediction: Jonathan Bernier takes over the crease from Quick in round one and carries the Kings to the Stanley Cup Finals.